Maybe you’re planning a family reunion, outdoor wedding, or just having a neighborhood BBQ. You need to be prepared to keep everyone entertained. There are plenty of fun outdoor games for large groups. From Cornhole to the old sack race, there’s great outdoor fun for all ages.

Most Popular Cornhole Boards on Amazon 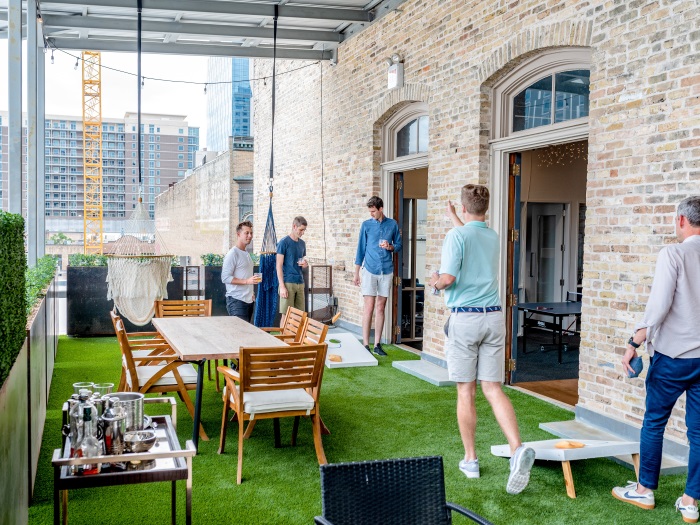 Cornhole is probably the most popular outdoor game for large groups in 2021. It’s a fun activity for any outdoor event, and can even be played professionally if you’ve got what it takes!

Cornhole is played by four or six people at a time. You need two boards and four or six bean bags. The game is set up by angling the board towards each other with the hole on the outside. Teams separate and stand behind the boards. You throw the bean bags at the board furthest away. You can put the boards close to each other and have everyone throwing in a parallel pattern to have multiple games going at once. Depending on one’s athleticism and skill level, casual cornholers (including myself) will enjoy a break after playing a full game to 21 points.

I was at a gender reveal party a few weeks ago (it was a girl!) where they had four cornhole boards. This allowed us to play two games at once and everyone had a blast – kids and adults. It can be as competitive or non-competitive as you make it. The groom-to-be created his own cornhole boards and said it was dead simple using a schema he found online.

We’ve all played Jenga in our life, usually as a child or in a bar setting. Now they make this game in enormous pieces and it’s number two on our list of fun outdoor games for sizeable groups. The gameplay is simple, take turns pulling a block from the tower and stacking it on top. Whoever makes the tower topple over loses.

Again, this is a modular game setup where you can have two to ten people playing on anyone building at a time, but you can have as many buildings as you have room for! 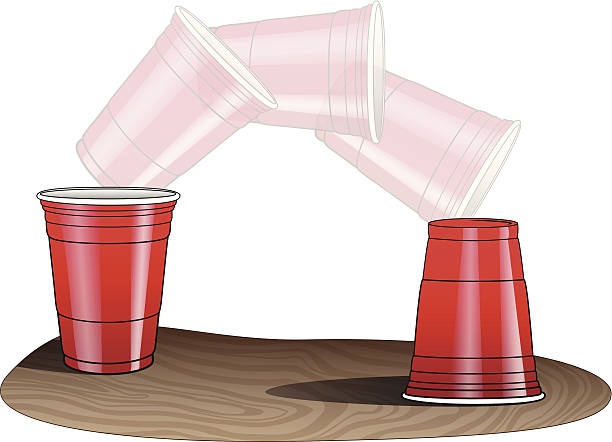 Flip cup can be a ton of fun in large groups, each side of the table cheering on their teammates. Flip cup doesn’t have to be played with alcohol, you can use water or don’t put anything in the cups. This is an incredibly cheap way to keep a big group of people entertained for hours. You just need a small pack of plastic cups and you’re good to go.

The rules are simple. Two teams get on separate sides of a table with a cup in front of each player. When you start, the person at the end of the table on both teams drinks whatever is in their cup and has to flip the cup by butting it on the edge of the table and tapping it with their finger until it lands upside down on the table. The next player then does the same. The first team to successfully flip all of their cups are the winners.

I’ve seen games of flip cup that had 50 players, 25 on each side of a long stretch of fold-out tables. I’ve also played games as small as two players. It’s exhilarating fun and the group size is unlimited!

#4 Kickball (soccer baseball for the Canadians)

Kickball is a grand sport to play when you have a large group of people. It keeps everyone engaged and can be played with teams of 12 or more. It’s safe and relatively low-effort compared to some other sports such as football and basketball. It involves teamwork, hand-eye coordination, and positive attitudes. It doesn’t require any skill-based experience or specialized equipment to play. You just need an open field, a ball, and friends/family. The balls are cheap and can be bought for just a few bucks. There are official rules, but few people play by them. Just set up your bases, assign a batting or kicking order, and have some fun!

An old-school favorite played at public community events all across the world. Sack, or potato sack, races can be an outstanding event for large groups. Racers take turns putting a ‘sack’ over their legs and have to hop and hobble to a finish line. It can be played in a relay-style race where players have to take turns completing a short segment of the overall race. There are quite a few different ways to race. The three-legged potato sack race is a blast. In this variation, two players stick one leg into the same sack and have to walk/run in unison to the finish line. It requires much coordination with your partner. A relay style three-legged race can keep any large group of people busy for a few hours.

You may remember playing this at an Easter gathering or at primary school sports day. Participants simply need a spoon and an egg to play. They have to carry the egg on the spoon a walk or run to a predetermined finish line. This is great for large gatherings because all the required materials are cheap and disposable (if you use plastic spoons). As long as you have room, usually in a big field or empty parking lot, a large number of racers can be supported. Many people also have the spoon and egg race as one leg of a larger relay race. It’s always a ton of fun and a perfect quick game for big groups.

For me, sports could’ve just as easily been number one on the list. It depends on your guests and what sports they like. My friends and I grew up playing basketball. We can be entertained for hours as long as I plan an event in a park near a basketball court. We recently played a friendly game of two-hand touch football on our lunch break at work in a corporate office. We had players, cheerleaders, and spectators, so everyone got in on the action. The cheerleaders had chants made up. And the players came ready to entertain. None of us were any good, but we ended up having a ton of fun with a large group in a work environment. It was a great team building and bonding experience. The ages ranged from interns just out of college to seniors near retirement.

I hope you’ve enjoyed this guide for the top outdoor games to entertain large groups. Remember to always stay safe, cherish your time with loved ones, and enjoy the great outdoors!

This Is A Custom Widget

This Sliding Bar can be switched on or off in theme options, and can take any widget you throw at it or even fill it with your custom HTML Code. Its perfect for grabbing the attention of your viewers. Choose between 1, 2, 3 or 4 columns, set the background color, widget divider color, activate transparency, a top border or fully disable it on desktop and mobile.

This Is A Custom Widget

This Sliding Bar can be switched on or off in theme options, and can take any widget you throw at it or even fill it with your custom HTML Code. Its perfect for grabbing the attention of your viewers. Choose between 1, 2, 3 or 4 columns, set the background color, widget divider color, activate transparency, a top border or fully disable it on desktop and mobile.
Go to Top